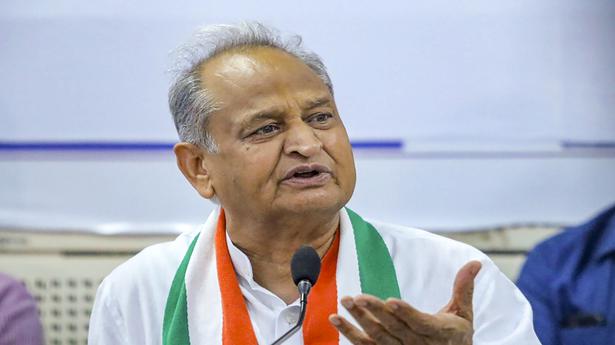 Rajasthan Chief Minister and senior Congress leader Ashok Gehlot on August 18 cautioned that India would meet the same fate as that of Pakistan if the ruling Bharatiya Janata Party (BJP) tries to turn the country into a ‘Hindu Rashtra’.

The Congress’ senior observer for the Gujarat Assembly elections also accused the BJP of fighting and winning elections only on the issue of religion.

Mr. Gehlot has been on a two-day visit to the BJP-ruled Gujarat from Wednesday to hold meetings with party leaders to review their preparedness for the upcoming Assembly polls, expected to be held in December this year.

Talking to reporters on the last day of his visit, Mr. Gehlot said, “Many people, such as activists and journalists, have been jailed by the BJP across the country. They are fascists, who are winning elections only on the issue of religion. Otherwise, BJP does not have any ideology, policy or governance model.”

He cautioned that India would meet the same fate as Pakistan if the BJP tries to turn the country into a ‘Hindu Rashtra’.

“Politics based on religion is the easiest of all and even Adolf Hitler indulged in it,” he said, while accusing the BJP of misguiding people in the name of “Gujarat model”.

Mr. Gehlot, who was in charge of the Gujarat Congress in 2017, said, “We were very close to winning the 2017 Assembly elections. But unfortunately, the way PM Modi pitched himself and acted like a Bollywood actor during the campaign, we lost. To gain sympathy, he even distorted Congress leader Mani Shakar Aiyar’s statement during the campaign and claimed that Aiyar called him a ‘neech aadmi’ [lowly person].”

“At that time, people used to make fun of BJP’s development model by saying ‘Vikas has gone mad’. It was a big issue in 2017. To counter that slogan, Modiji, like an actor, came out with a slogan that ‘I am Vikas’. He even landed on a river on a seaplane to win the elections,” the senior Congress leader added.

In the 182-member House, the BJP had won 99 seats, while the grand old party had bagged 77 seats in the 2017 Gujarat elections.

The senior Congress leader claimed that the Enforcement Directorate (ED) under the BJP has been “terrorising” people because the agency has more power than the Central Bureau of Investigation (CBI).

Referring to the exit of several Congress MLAs who later on won as BJP candidates in the bypolls, Mr. Gehlot said the Gujarat BJP has given “horse trading model” to the country.

He also slammed the Modi government for introducing electoral bonds, which according to him, does not provide a level playing field for other parties because majority of the donations are going to BJP under this scheme.

“Electoral bonds will destroy this country. People [industrialists] are giving donations to BJP through this bond out of fear. They fear that ED may raid them if they do not give funds. Thus, electoral bonds do not provide a level playing field,” said Mr. Gehlot.

The Rajasthan Chief Minister said the people of the country need Congress to save the country because the “DNA of both India and Congress is the same”.

On the occasion, Gujarat Congress launched its digital as well as outdoor poll campaign banners and posters.